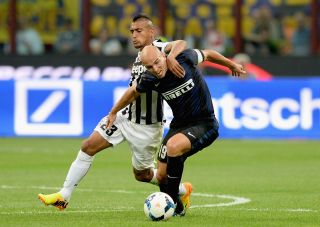 The Chilean placed his shot calmly into the bottom corner to give the champions a share of the spoils, with both sides wasting chances to grab a winner late on.

For Inter boss Walter Mazzarri, the result represented more encouraging signs of progress, having seen his side hit six goals in three matches, including three unanswered against Catania last week, as they look to rebuild after last season's disappointing ninth-place finish.

Meanwhile, the draw at San Siro gave Napoli the chance to go top of Serie A as they beat Atalanta 2-0.

Gonzalo Higuain and Jose Callejon got the goals but the visitors were hardly helped after Luca Cigarini was sent off against his former club for two bookable offences.

Napoli rotated their squad for the clash with their midweek UEFA Champions League game against Dortmund in mind, and they were only able to break down Atalanta after Marek Hamsik came on.

In the day's other match, Milan hit two late goals to snatch a 2-2 draw against Torino.

Danilo D'Ambrosio and Alessio Cerci had given Giampiero Ventura's side a two-goal cushion midway through the second half before Sulley Muntari and then Mario Balotelli from the penalty spot netted in a late surge to save Milan from defeat.