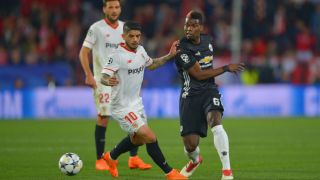 Manchester United survived plenty of pressure to claim a 0-0 draw at Sevilla in the first leg of their Champions league last-16 clash, owing particular thanks to an immense David de Gea save at the end of the first half.

Sevilla controlled proceedings for much of the game and, although they generally struggled to craft clear-cut chances, Luis Muriel saw their best denied in stunning fashion by De Gea as United battled to return home with honours even.

The pre-match debate surrounding Jose Mourinho's decision to drop Paul Pogba took on a new dimension after just 17 minutes when the Frenchman replaced the injured Ander Herrera, though he was unable to flourish as Sevilla dominated.

United had to rely on the heroics of De Gea to keep them on level terms at the break, with the Spain international denying both Gabriel Mercado and Muriel late on – the Colombian drawing a remarkable save from the former Atletico Madrid star.

The second half was similarly frustrating for the home side and United began to see more of the ball after the hour as the contest opened up.

But ultimately neither team could find a way through, with Pablo Sarabia wasting a good chance for Sevilla late on, giving Vincenzo Montella's men work to do in the return leg at Old Trafford on March 13.

Goalscoring opportunities were not exactly a regular occurrence, but Muriel forced De Gea into a fine stop from distance in the fourth minute and Jesus Navas shot just wide of the bottom-left corner from a similar distance a few moments later.

Pogba was then handed his chance of a reprieve, replacing the stricken Herrera, and United appeared to become more stable in midfield as a result.

Their first chance came soon after, but Romelu Lukaku blasted his volley well over from just inside the area following Alexis Sanchez's excellent lofted pass.

The visitors were fortunate to still be on level terms at half-time, though.

De Gea rescued United twice right at the end of the half, tipping Mercado's header over before then producing an excellent save to deny Muriel's nodded effort.

The definition of respect.Stalemate. February 21, 2018

Sevilla remained dominant at the start of the second half, but their inability to craft clear-cut chances blighted their play, seeming to run out of ideas once in the final third.

Muriel summed up Sevilla's frustrations just before the hour mark, dragging a left-footed effort wide of the right-hand post.

De Gea was eventually called into action again in the 64th minute, but he had little difficulty getting down to keep Clement Lenglet's header.

The United goalkeeper was helpless 15 minutes from time, but Sarabia headed over from close range following Muriel's right-wing cross.

That proved to be the final chance and it will be United who look ahead to the second leg with the greater satisfaction, having emerged from a tough contest with no damage done.