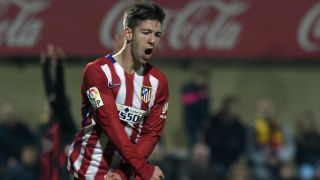 Reports in Spain suggest the Europa League holders are on the verge of completing a loan deal for the 22-year-old Atletico Madrid striker.

Barca have also been linked with a bid for the former Argentina youth international, who is said to be sorely tempted by the prospect of linking up with compatriot Lionel Messi, even though he would face reduced playing time at Camp Nou.

While Castro remains hopeful of concluding a deal, he says Vietto should not turn down a move to Luis Enrique's side if that is his preferred option.

"Vietto is a superb player and hopefully we can bring him into our squad," he told Cadena Cope. "[Sporting director] Monchi is working hard and he is one of the options, but I'm sure there are others.

"I don't know if Vietto likes Barcelona more - if he does, he should go there. It's important that players are where they want to be."

Kevin Gameiro has been linked with a move to Atletico from Sevilla, meanwhile, but Castro hopes to tie the France striker down to a new contract.

"Gameiro is an extraordinary footballer. When [Carlos] Bacca was here, he always used to come on and score goals," he said. "He's had two seasons with us, we want to renew his contract and to continue to make the Sevilla fans happy with his goals."

Emery guided Sevilla to a record three Europa League titles in a row during his time at the Ramon Sanchez Pizjuan, and Castro hopes that Sampaoli - who claimed Copa America glory with Chile in 2015 - can continue that run.

"Jorge Sampaoli's era has begun," he said. "He's been a champion coach with Chile and it's a total change, because he has new ideas. We want to keep improving and we're desperate to triumph in the Europa League."