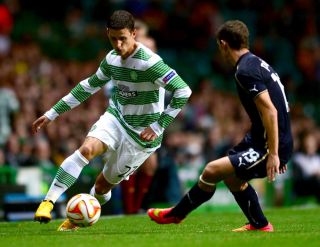 The Bulgaria international winger, on loan from Premier League side Aston Villa for the remainder of the season, was sanctioned by the Scottish Football Association (SFA) on Thursday.

Relating to an incident that took place in the Scottish champions' 2-1 win over Aberdeen at Parkhead in September, Tonev was initially accused of racially abusing Shay Logan.

Logan reported the incident to referee Bobby Madden and, despite Tonev initially denying the accusations, the SFA banned him on Thursday.

The SFA said on their official website that Tonev was guilty of breaking "Disciplinary Rule 202: Excessive Misconduct by the use of offensive, insulting and abusive language of a racist nature."

Tonev is to appeal the decision, however, with a Celtic spokesperson stating: "Racism has no place in football and as a club for all people, Celtic absolutely abhors racism of any kind.

"This was a very unfortunate case, but the club has accepted Aleksandar's explanation that he did not say the words that were alleged to have been said and that he is not a racist.

"We are, therefore, very disappointed by the outcome and can confirm that Aleksandar will be appealing this decision.”

Provided Tonev's suspension remains, the 24-year-old will be unavailable for selection in the Scottish Premiership for the remainder of the year, with the trip to Partick Thistle on January 1 a potential comeback date.