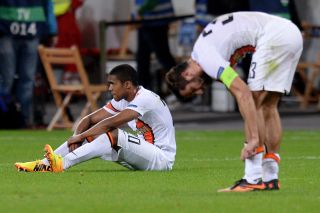 Stefan Kiessling's brace and goals from Simon Rolfes – a penalty – and Sidney Sam saw the Bundesliga outfit claim a surprisingly convincing win at BayArena on Wednesday.

Lucescu was devastated by the heavy defeat, which leaves his team third in Group A – two points behind Bayer Leverkusen and three adrift of leaders Manchester United.

"It is hard to find the right words because this result is really embarrassing," Lucescu said.

"The first half was about equal, apart from the goal, and we also had a good chance with (Alex) Teixeira's effort. The second half started equal, too.

"Now we have to prepare for the next match and I hope my players remember this night and do the right things in the next game, which will be completely different from tonight."

Lucescu said conceding a penalty just five minutes into the second half was costly for his side and lamented the mistakes made by his team.

"In the second half we wanted to play with more power but the penalty ruined our plan," he said.

"Then we became nervous and made a lot of mistakes. To rate my players today is impossible.

"Everyone tried to assume some responsibility but things didn't work out, not even for one player. I'm surprised even my experienced players made so many mistakes."