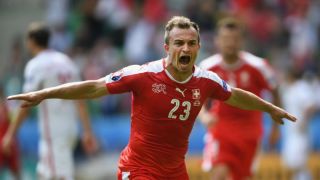 Stoke City attacker Xherdan Shaqiri has laughed off suggestions he could leave his current club for Borussia Dortmund this transfer window.

The Switzerland international previously enjoyed a spell in the Bundesliga with Bayern Munich between 2012 and 2015 and recent reports claim he could be on his way back to Germany.

However, the 24-year-old has made it clear a transfer is not an option at this stage.

"Nobody has been in touch with me, so it's nonsense that I am in talks with Borussia Dortmund," Shaqiri told Blick.

"I am on my holiday at the moment.

"A move to the Bundesliga is out of the question at the moment. I will resume Stoke training on July 24 and I am really looking forward to playing in the Premier League again.

"We finished ninth in the table last season and we want to do even better this campaign. And I want to score more goals than in 2015-16."

Shaqiri has a contract with Stoke until June 2020.