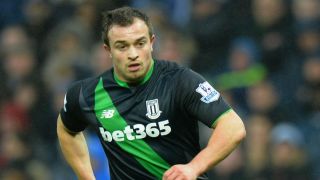 The Switzerland international was expected to start the Premier League game at the Britannia Stadium, but the club's medical staff have decided not to risk him ahead of Sunday's visit of Arsenal.

Stoke boss Mark Hughes rested the former Basel star for Saturday's 2-1 win over Doncaster Rovers in the FA Cup, but the 24-year-old has been unable to prove his fitness prior to the Norwich match.

Shaqiri, who has scored two goals in 16 league games this season, will now have a scan to assess the extent of the damage.

Confirming the injury, Stoke posted on Twitter: "Mark Bowen confirms @XS_11official has a hamstring problem and will not be risked this evening. He will have a scan ahead of Sunday's game."