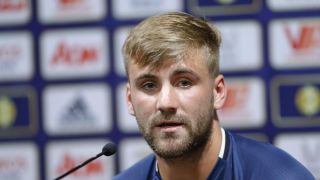 Luke Shaw feared for his career after breaking his leg in two places in a Champions League game for Manchester United last September.

Shaw suffered the injury in a match against PSV and missed the rest of the campaign, including Euro 2016, as a result.

But the left-back is fit and ready for 2015-16 with United set to continue their pre-season preparations against Borussia Dortmund in the International Champions Cup on Friday.

"When I first did it, the first thoughts that went through my head were 'am I going to play football again' and 'how long am I going to be out for'," Shaw said.

"I wasn't thinking too much of the pain because I can deal with that at that point but yes there was a fear of how long it was going to take or even if I was going to get back playing football.

"Obviously as I was going through [the rehabilitation process] I knew I was coming back. I think now I'm just looking past it, I'm not going to look back, I'm just going to look forward now and obviously my leg feels great and I just want to push on in this pre-season and get fully fit."

Shaw said returning to action was an emotional experience, especially as his comeback in a recent friendly against Wigan Athletic was in front of his family.

"It is the best feeling ever," Shaw told a media conference on Thursday. "When I had my first game on Saturday against Wigan, I felt so emotional.

"The way the crowd were with me, the cheers when I first had my first touch... that meant a lot to me. Obviously my family were there to see it and like I said it was the best feeling."

Shaw is excited to work with new Manchester United manager Jose Mourinho, predicting the club will be challenging for titles despite missing out on qualification for the Champions League last year.

"I'm really looking forward to working with him," said the 21-year-old. "We've done a couple of weeks now and I've spoken to him a couple of times and obviously the other players have talked to him as well.

"I think we are going to be challenging for every sort of title that we can go for this season. We all feel strong as a group and it's important now to sort out the tactical side of what Jose wants us to do in games, so we're practicing that in training sessions and hopefully we can take that into games and show a very strong side.

"There will always be players coming in. You have to get used to that. Everyone has looked normal, there have been no discussions about anyone leaving. We're enjoying the training at the moment."