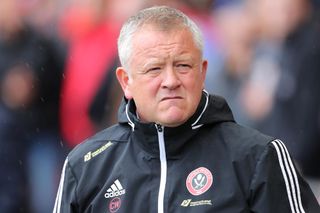 Wilder swapped all 11 players for Sunday’s third-round tie against the non-league side, which came on the back of Premier League away matches at Manchester City and Liverpool either side of the new year.

The Blades boss felt he had no choice but to rotate his squad after insisting that the trips to the Etihad Stadium and Anfield – on December 29 and January 2 respectively – had left his players both mentally and physically fatigued.

“When I saw the draw a few weeks ago I was going to play a strong side. But just looking at how the boys were, and the intensity of the fixtures coming up, I decided not to,” said Wilder, whose side are back in action against West Ham on Friday night.

“I have full respect for the Championship, that is intense. But at this level, we go to Manchester City and then Liverpool away from home. That is really intense.

“You never used to see many changes in the third round but the introduction, rise and growth of the Premier League means that’s by far the biggest competition in this country.

“I hope people will understand why we made 11 changes, and I have given the other lads a couple of days off, to go away and to clear their heads.”

Meanwhile, Wilder would not be drawn on reports linking the Blades with a move for Rangers midfielder Glen Kamara this month.

“I’m not trying to be clever when I say I won’t name any names,” said Wilder. “We’re in the situation where we have to work hard and be diligent with our signings.

“In the past, we have flagged people up and then someone has come in over the top of us. I’m not embarrassed about that. But of course, we’d love to improve our squad.”