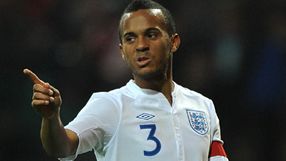 The English FA said in a statement that left-back Kieran Gibbs had been ruled out of the squad with injury, prompting Bertrand's call-up following two previous caps.

Regular left-back Ashley Cole, charged with misconduct by the FA on Monday for a foul-mouthed Twitter comment about the organisation, joined up with the squad as normal ahead of the San Marino game at Wembley on Friday and the October 16 trip to Poland.

England coach Roy Hodgson raised eyebrows when calling up uncapped duo Raheem Sterling of Liverpool and Adam Lallana of Southampton for last month's Group H qualifier against Ukraine and Shelvey's addition this time is another surprise.