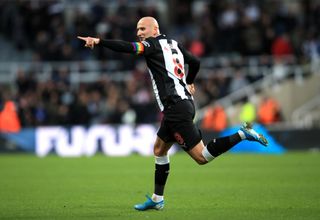 Jonjo Shelvey is back in the Newcastle squad for Saturday’s crucial Premier League clash with Burnley.

The midfielder has missed the last six games with a hamstring injury, but has returned to training this week along with defenders Emil Krafth (ankle) and Javier Manquillo (hamstring).

The Clarets’ leading goalscorer (hamstring) missed last week’s home win against Bournemouth, but has returned to full training and boss Sean Dyche must decide whether to recall him or retain Matej Vydra.

Midfielder Johan Berg Gudmundsson has had a minor setback in his recovery from a hamstring problem, while Ashley Barnes (hernia) and Matthew Lowton (knee) are still out.