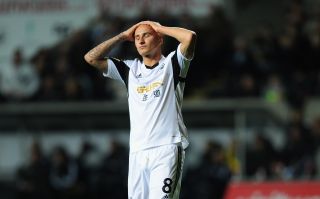 Shelvey sat out Swansea's goalless stalemate against West Ham on Sunday, the midfielder being hampered by a hamstring injury.

Laudrup, though, is confident the close-season signing from Liverpool will give him a selection headache for next weekend's all-Welsh Premier League encounter at Cardiff.

Explaining why Shelvey was absent against West Ham, Laudrup said: "Shelvey was injured, he has a tight hamstring.

"They say he could be back training by Wednesday."

The intense rivalry between Swansea and Cardiff means the scene is set for a mouth-watering derby in the Welsh capital next Sunday, which will be the first time that Laudrup has experienced the game from the dugout.

He added: "They are very special games these ones.

"You know it means a lot to a lot of people especially the fans. They want to win all the games but there are some that are so special. I watched Newcastle, Sunderland before our game (on Sunday), you can see it's something special.

"A lot of people will talk about the game in the street, and say we have to win, but it's okay because it means the players know how important it is to the fans.

"Of course, the games after this are important too, but they realise how important it is to the fans."