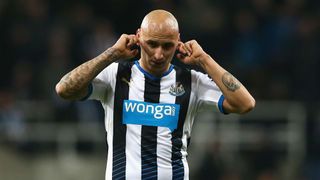 Newcastle United midfielder Jonjo Shelvey is confident he will repay his transfer fee at St James' Park and prove a success under Steve McClaren.

The England international moved from Swansea City for a reported £12million last week and enjoyed an impressive debut as Newcastle beat West Ham 2-1 on Saturday.

Newcastle's sizeable investment in the 23-year-old raised some eyebrows as they seek to move away from the relegation zone, but Shelvey feels he has what it takes to justify the club's faith in him.

"[The fans] work all hours of the week to pay for their tickets for the game. It is a pleasure for any player that they want to come and see us," he told the Newcastle Evening Chronicle ahead of this weekend's trip to Watford.

"The only way you can repay them is by going out and doing it on the pitch.

"I am from a working-class background. I lived in a council house my whole life. I feel that I can fit in here and that I can be the right player for the club.

"I really want to show these fans what I am about."

Shelvey has regularly shown glimpses of his talent during spells at Liverpool and Swansea, but struggled for consistency and questions have been asked of his mentality.

The midfielder's time at the Liberty Stadium came to a close amid on-field disagreements with the club's travelling support as Swansea were knocked out of the FA Cup by League Two outfit Oxford United.

Frustrations over a lack of match action added to Shelvey's acrimonious departure, but he added: "I don't see myself as a player with a bad attitude. I don't know where people get that.

"What hasn't helped me in the past is some people have reported things and a lot of people just believe what is written. I don't see myself with a bad attitude and I will show myself to the Newcastle fans.

"I hope that the comments will stop about a bad attitude. My number one goal is to show these fans that I am the right person for the club."