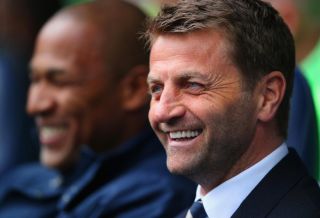 The 45-year-old replaced Andre Villas-Boas at White Hart Lane in December, as Spurs chased a spot in the UEFA Champions League football.

If north London rivals Arsenal beat Newcastle United on Monday, however, then those hopes will be mathematically ruled out.

That failure coupled with high-profile defeats to Chelsea, Liverpool and Arsenal have cast doubts on Sherwood's long-term future at the club, with the likes of Netherlands head coach Louis van Gaal and former Tottenham manager Glenn Hoddle linked with the post.

However, Sherwood believes he has performed well in the role and feels it is disrespectful that other managers are linked with his position while he remains in the job.

He said: "Every time I speak to you guys (the media) it's the same: 'This manager's coming in. Van Gaal, then Hoddle, this one and that one.'

"Some of these managers are actually touting themselves for my job. I don't think that's right.

"It's something that doesn't sit well with me. If anyone ever asks me about another job I just tell them that they've got another manager. Until they haven't got a manager and until I haven't got a job, say nothing.

"I've done all right, you know. It's been hard. I've had to keep my discipline I suppose, and my dignity, pride and just get on with the job. That's all I’ve tried to do.

"My brief when I came into the club was to find a way to score more goals. We'd scored 15 when I took over and I think we've got (another) 37 now so I think I've ticked that box."

Tottenham have won 12 of the 20 Premier League games under Sherwood's stewardship, and sit sixth with 66 points from 36 games.

If they win their final two games of the season, against West Ham and Aston Villa, Spurs will equal their record points haul for a Premier League season, with 72.