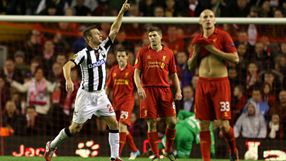 Eto'o, who last week ended his stand-off with Cameroon officials and agreed to play for his country again, converted a 62th minute penalty against the run of play.

He then turned in Oleg Shatov's cross in the last minute to complete a 2-0 win over the Swiss side and extend Anzhi's unbeaten run to seven matches in the competition, including the qualifiers.

The Group A match was played in front of a sparse crowd in Moscow, where Anzhi are playing for security reasons after UEFA refused to let them stage matches in the violence-plagued Dagestan region.

The Uruguayan player known as "The Onion" let fly from outside the area to leave Diego Simeone's team with six points from two games at the top of Group B.

Liverpool were another side to rest their regulars but still took a first-half lead against Udinese through Jonjo Shelvey.

However, Antonio Di Natale levelled with a superbly-taken goal immediately after the break and he cleverly set a third for Giovanni Pasquale shortly after Liverpool defender Sebastian Coates headed into his own goal.

Liverpool brought on Uruguay forward Luis Suarez who scored with a perfectly flighted free kick but could not inspire an equaliser.

Videoton gave Hungarian football a rare boost with a 3-0 win over Sporting, the goals coming in the first half from Paulo Vinicius, Filipe Oliveira and Nemanja Nikolic, while Sparta Prague beat last season's runners-up Athletic Bilbao 3-1.

Inter Milan enjoyed an easy 3-1 win at Azerbaijan's Neftci thanks to first-half goals from Philippe Coutinho, Joel Obi and Marko Livaja, all set up by Colombian Fredy Guarin.

Compatriots Lazio scraped a 1-0 win at home to Slovenia's Maribor with a 62nd minute goal by Brazilian Ederson. They moved top of Group J with four points.

Tottenham Hotspur are still awaiting their first win after drawing 1-1 at Panathinaikos.

Napoli, another team resting their top players with Edinson Cavani among those on the bench, were the only letdown for Italy as they were over-run at Dick Advocaat's PSV where Jeremain Lens, Dries Martins and Marcelo shared the goals.

Former England manager Steve McClaren's Twente Enschede narrowly avoided defeat at Helsingborg after Rasmus Bengtsson and Douglas scored in the last quarter of an hour to give them a 2-2 draw. Two goals from Nicola Djurdic had put the Swedes 2-0 ahead at halftime.