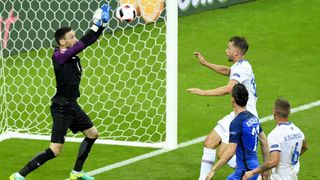 Gylfi Sigurdsson wants France and his friend Hugo Lloris to claim Euro 2016 glory after they ended Iceland's remarkable run with a 5-2 quarter-final win in Saint-Denis.

Iceland's exploits in moving through the competition unbeaten, with wins over Austria and England, appeared to catch up with them on Sunday and France ruthlessly exploited signs of fatigue among a starting XI unchanged for the fifth consecutive game.

Didier Deschamps' men cruised into a 4-0 lead at half-time, with tournament top scorer Antoine Griezmann to the fore before Olivier Giroud completed his brace after half-time.

There were welcome goals from Kolbeinn Sigthorsson and Birkir Bjarnason to restore a measure of Icelandic pride but Swansea City midfielder Sigurdsson reflected on a supreme first-half showing from the hosts, who now face the prospect of a mouthwatering semi-final against world champions Germany in Marseille on Thursday.

"Their attack is so good, they have got very good players going forward. And their keeper, Hugo, made some fantastic saves," Sigurdsson said.

"If they can get through Germany I think they will win the tournament.

"They are the best team we've played by far. Their passing going through our defence was very good."

Lloris and Sigurdsson played together during the latter's two-year spell at Tottenham. Before the game, the goalkeeper described his former team-mate as a "lovely guy" and post-match it was clear such affection cut both ways.

"I spoke to Hugo after the game. I wasn't very happy with him making a few saves in the second half," Sigurdsson joked.

"He's a good guy and a fantastic goalkeeper. I wished him all the best and hope they win the tournament now."

Next on the agenda for Iceland in September is the start of a daunting 2018 World Cup qualifying group alongside Croatia, Ukraine, Turkey, Finland and Kosovo.

Despite understandable post-Euro 2016 weariness, Sigurdsson is relishing the challenge.

"We've got a couple of months I think [until the qualifiers], maybe a month - I don't know what day it is," he added.

"It's not long until we start again with the World Cup. It's a very tough group with tough teams. It's going to be very difficult to qualify.