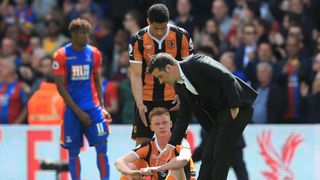 Marco Silva felt Hull City were punished for their dreadful start against Crystal Palace as defeat to Sam Allardyce's side confirmed their relegation from the Premier League.

The visitors slipped to a 4-0 loss at Selhurst Park that sent them back to the Championship after one season in the top flight and ensured that Palace and Swansea City will stay up.

Hull realistically needed a win to keep their survival fight going until the final day, but went behind after only three minutes, as Wilfried Zaha capitalised on a mistake from Andrea Ranocchia.

Silva's side had nearly 74 per cent of the possession in the second half but did not manage a shot on target in the whole game, and the 39-year-old was left to rue their bad start and poor decision-making.

"It's a sad day for our fans and our boys," he told BBC Sport. "It's not a good moment. Now we have to take the next step and find out why this happened.

"We came here to play one final and we started in a bad way. It gave Palace what they wanted for the match. They knew what's in it for them.

"We tried but conceded again and it finished the game. We tried to make changes at half-time for a small reaction. Possession is not enough. You have to take the right decisions. At this level it makes a difference."

Silva took over in January after Hull had endured a run of one win in 18 games and greatly improved their performances as they made a spirited fight for survival.

"When the club came to me, we knew we were taking on a big risk," he said. "But we had one target to stay in the Premier League. We did our best to improve the boys in the team and that was our job."

Hull captain Michael Dawson was disconsolate at the final whistle and admitted that their "terrible" away form had cost them dearly.

"The feeling of relegation is hard feeling to express," said Dawson, whose side have lost all but four of their away league games this term. "It's a game we knew we had to win and got off to the worst possible start.

"We were playing risky football and got punished. It wasn't today we got relegated. The manager gave us a fighting chance but we've come up short.

"We've had some tough away games. Our form has been terrible. The tables turned last weekend so we came here with a big ask. It's a disappointing day.

"Relegation is the worst feeling as a footballer. Twelve months ago, it was an unbelievable feeling [to be promoted]. I know how hard it is to get out of out of the Championship. We'll regroup and come back fighting."