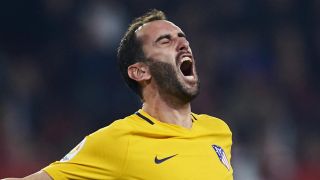 Atletico Madrid defender Diego Godin will come straight back into the team after undergoing surgery on a mouth injury, Diego Simeone has confirmed.

Godin was named in the squad to face Copenhagen in a last-32 Europa League tie on Thursday after requiring surgery following a collision with Valencia goalkeeper Neto at the start of the month.

A tooth appeared to leave Godin's mouth in the incident and the centre-back needed reconstructive surgery to repair the damage, missing Saturday's 1-0 win at Malaga as a result.

But Simeone believes the defender is fit enough to face Copenhagen as Atleti seek to extend their European adventure after a premature Champions League exit.

"Diego trained well and knowing that Copenhagen will play in the air, I absolutely believe in Diego and how great his style of play will definitely help in tomorrow's match.

"Copenhagen are a tough and difficult opponent and they'll probably play with a lot of motivation in their stadium. I played here with Lazio a while ago and the atmosphere was very beautiful.

"We'll have to seize control of the match. They defend as a group and play with a 4-4-2. When they stop defending, they create their play on the wings and we'll have to be ready to defend those kind of situations."

Atleti were among the pre-tournament favourites but, after being drawn with Roma and Premier League champions Chelsea, crashed out in the group stage, winning only one of their six matches.

And although his side are in the hunt for the LaLiga title, sitting seven points behind Barcelona, Simeone is targeting Europa League success.

"I don't look beyond the game tomorrow," Simeone added. "My mind and enthusiasm are focused on the game that lies ahead, and making my players think the same.

"The rest is in our imagination. We live in reality, not in our thoughts, and reality is what is going to happen tomorrow.

"Just as we have faced European ties in the same way for the past seven years, we will face the Europa League. We will go game by game until we are stopped, that is the reality we have ahead."