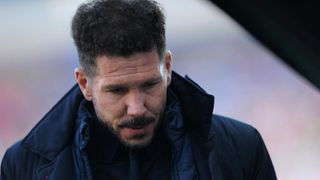 Diego Simeone is tired of discussing his future as he focuses on securing a third-place finish for Atletico Madrid in LaLiga.

Speculation over Simeone's long-term future in Madrid has dominated headlines throughout the season and the Argentine coach has been linked with a move to former club Inter.

Simeone has made no secret of his desire to coach Inter, who are searching for a new boss following Stefano Pioli's sacking.

However, Simeone said there is no need to clarity his future ahead of Sunday's trip to Real Betis, with Atletico third and seeking to wrap up Champions League qualification.

"Everybody cares about doing things well against Betis and taking care of that," Simeone told reporters.

"After that we have spoken already a lot of times about my situation and there is no need to clear anything up about it."

"Sincerely the only thing I am thinking about is what we need to do to make sure of third position.

"Later on we can look at those things you have asked about, but today the only thing that matters is what we need to do to get into a direct Champions League place for next season."

Atletico also reached the final four in the Copa del Rey – their run ended by Barcelona in February.

"We are proud of how we have competed both in the Spanish Cup and the Champions League, getting to the semi-finals and playing great games in both, and now we have to keep competing because the biggest aim this club has is to keep improving," Simeone said.

"We have to think about Betis who always have good players. It is at home for them in their last game there, so they will be up for it and we have to be the same."