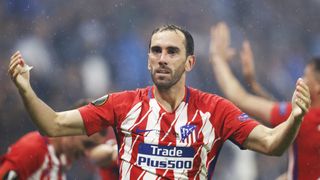 Diego Simeone has not ruled out the possibility of Diego Godin leaving Atletico Madrid amid speculation linking the Uruguay international with Juventus.

Godin has emerged as a transfer target for the Bianconeri as Massimiliano Allegri looks to strengthen his defensive options.

Juve already have Andrea Barzagli, Giorgio Chiellini and Daniele Rugani but the latter reportedly is close to joining Chelsea.

Rather than dismiss the claims out of hand, Simeone chose to stress his desire to get Atletico to the level of Juve and that 2018-19 would be a great campaign.

"It's normal, we're used to the fact that the best players want to go to the best teams," Simeone told a media conference ahead of Atletico's International Champions Cup clash with Arsenal.

"So, it does not surprise me at all. It's not just Godin but also true for the big players.

"I can say that this club is growing, it wants to compete with the best clubs in the world. This is going to be an exciting year for our supporters."

| PRESS CONFERENCE: " is a lad who's constantly improving. We saw it last year and his characteristics can help us. He'll give us competitiveness on the right wing."July 25, 2018

One player who will definitely be with Atletico this season is Gelson Martins after the free agent signed a five-year-contract with the Rojiblancos, and Simeone is excited to have him on board.

"Gelson is a lad who's constantly improving," added the Atleti boss. "We saw it last year and his characteristics can help us.

"He'll give us competitiveness on the right wing and offensively if we play with three up front."