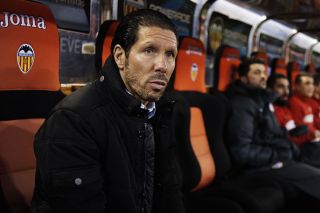 Simeone's side were denied an advantage going into the second leg at the Vicente Calderon next Tuesday, as Valencia forward Helder Postiga equalised in the dying stages at the Mestalla much to the joy of the home fans.

But Simeone was unflustered by conceding the late goal, claiming his men fought valiantly to ensure the round of 16 tie is all square.

"It was a game of two teams with different characteristics," the Argentine said.

"A team with possession, bravery and attack in Valencia.

"In the first half they created fewer chances in the second half, after our goal, they had more.

"On the other hand, there was a team that fought with pride and courage, which failed to be beat on the counterattack as expected but with a strong effort during the 90 minutes we got an important result and there is a 50 per cent chance on Tuesday."

Simeone singled out goalkeeper Thibaut Courtois and goalscorer Raul Garcia for praise, with the Belgian shot-stopper making some remarkable stops throughout - none better than his diving tip save to deny a curling shot from range by Sergio Canales midway through the second half.

"Raul is a player with a great effort, we both know he gives his best for the group.

"But besides him Adrian is right up there and (Jose) Sosa's arrival will make us grow and gives us reason to be more optimistic. We try to keep improving."

Atletico have an impending top-of-the-table clash with Barcelona in La Liga on Saturday but Simeone was determined to not let it distract them from the cup tie.

"We are aware that every game is competition and different.

"It is psychological, if you win you are happy and if you lose you are angry and we want to win."

"I cannot take the majority of credit for what we have done," Pizzi said.

"The main architects of this significant change, simply and solely are the players, their desire to reverse adverse situations.

"In the short time that we have had (together), I have only tried give peace of mind, some order and structure."

Pizzi, who took the reins from Miroslav Djukic late last month, said his arrival had brought a freshness to the squad.

"Whenever there is a coaching change, it generates expectations and enthusiasm in the players," he said.

"By changing the mood of a team and being a good squad, they will have the opportunity to demonstrate the quality they have."