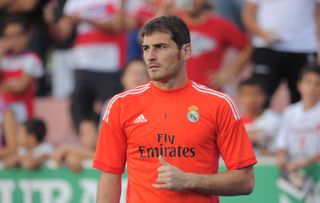 And that trend has continued in the club's opening two La Liga fixtures of this campaign, with new boss Carlo Ancelotti retaining faith in Lopez.

That has led to speculation Casillas could leave the Bernabeu as he looks to cement his place in Spain's side in next year's FIFA World Cup in Brazil.

But speaking ahead of his team's Supercopa de Espana second leg with Barcelona, Simeone said there is no chance of the 32-year-old moving across the Spanish capital to the Vicente Calderon.

"(Thibaut) Courtois is our goalie," the Argentinian stated.

"And we have two other goalkeepers waiting for their chance. So no, we wouldn't be interested in Iker Casillas."

Simeone also said he wants Lionel Messi and Neymar to play for Barcelona against his team in Wednesday's game at the Camp Nou.

The two sides played out a 1-1 draw in the first leg in Madrid last week, but Messi only completed 45 minutes due to a thigh injury, while Neymar came off the bench to equalise David Villa's opener.

"I hope Messi and Neymar play because that would be a terrific show especially for all of those who will see the match on TV being relaxed in their living room," he added.

"I think it is best that the best players play. Barcelona have a lot of choices, it will be up to their manager to decide who plays."