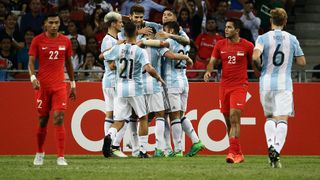 Argentina secured a comfortable 6-0 victory over Singapore on Tuesday to continue head coach Jorge Sampaoli's winning start to the job.

Goals from Federico Fazio, Joaquin Correa, Angel Di Maria, Lucas Alario and debutants Alejandro Gomez and Leandro Paredes gave the visitors the win at the Singapore National Stadium against a side ranked 155 places below them.

Sampaoli, who was appointed as successor to Edgardo Bauza last month and enjoyed a 1-0 win over Brazil in his first match in charge last Friday, rested the likes of Lionel Messi and Gonzalo Higuain as he gave fringe players the chance to impress in a bold 2-3-4-1 system.

It was Atalanta star Gomez who best took his opportunity, setting up Fazio to open the scoring before firing in a goal of his own after Correa had made it 2-0 from a Paulo Dybala cross.

A relentless Albiceleste saw Paredes cap an excellent display with their fourth, while Alario and Di Maria completed the rout against opposition who offered almost nothing by way of an attacking threat of their own.

For Sampaoli, a second win and clean sheet in a row offer signs of encouragement to his hopes of rescuing their World Cup qualifying campaign, which resumes with a trip to Uruguay in August.

1 - Alejandro Gómez has scored his first goal for in his first game played for his national team (4th shot attempted). Papu. June 13, 2017

Argentina effectively played with a seven-man attack during an opening 25 minutes in which they had 84 per cent of the possession, but it was a centre-back who finally gave them the lead.

Gomez's corner was missed by Correa, but Fazio met the ball unmarked to guide a side-foot volley into the bottom-right corner from 12 yards out.

Argentina doubled their lead from another corner on the half-hour mark, Dybala picking up a short pass before drilling the ball across goal from the right, where Correa was on hand to tap home.

Singapore suffered a blow after the break when goalkeeper Hassan Sunny was forced off with injury, but their well-organised defence continued to frustrate Argentina in their pursuit of a third – until Gomez took a more direct approach.

The home side failed to clear their lines and Gomez collected the ball 20 yards out before blasting a low shot past replacement keeper Izwan Mahbud and into the net.

Paredes was handed his first senior appearance off the bench and almost made it 4-0, clattering the base of the post with a fierce strike from the edge of the area, as Argentina continued to push forward.

The Roma man was not to be denied on 74 minutes, however, as he rode a poor challenge from Faritz Hameed before unleashing a dipping shot from 20 yards that nestled into the right-hand corner.

River Plate's Alario saw a good chance for a fifth blocked at close range but he made amends in the 90th minute, rifling in off the right-hand post after being sent clean through by Di Maria's header.

Argentina's impressive outing was capped by Di Maria's goal in the dying seconds, the Paris Saint-Germain star impudently backheeling the ball into the net from Ignacio Fernandez's cut-back.