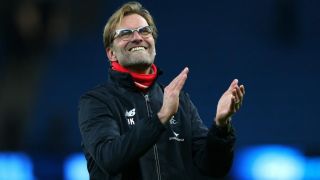 Jurgen Klopp has declared his new six-year Liverpool contract to be "like 60 years" and accepted it means the pressure is on him to succeed at Anfield.

Despite only being appointed in October 2015, the German coach has extended his deal after reaching the League Cup and Europa League finals last season.

Klopp praised the "consistency" on show at the club and revealed he had not expected to be offered fresh terms so early in his tenure.

"I like this sign for consistency," Klopp told LFCTV. "We have to make decisions and we made the decision to stay together.

"Usually you don't have to make the decision and you wait to see what happens.

"It was an early moment when the club asked me, I was surprised about it, I thought about it but thought it felt right, so we did it and now we are happy.

"When you talk about six years, it's a really long term. Six years in football is like 60 years so we really need to be successful in the future. That's clear."

Klopp's Liverpool beat Tranmere Rovers 1-0 on Friday in a pre-season friendly, with England international Danny Ings scoring the only goal of the game as he continues his comeback from a cruciate ligament injury.