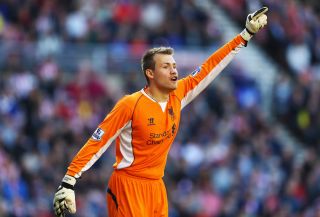 The 24-year-old has made a big impression since moving to Anfield from Sunderland in June, keeping three clean sheets in seven Premier League appearances for Brendan Rodgers' side.

Assured performances at one end of the pitch by the Belgium international and from the likes of Luis Suarez and Daniel Sturridge at the other have proved decisive as Liverpool currently sit level on points with league leaders Arsenal.

Mignolet marked his debut with a late penalty save in a 1-0 win over Stoke City on the opening day of the campaign and has built on that display, much to the delight of Skrtel.

"We knew he was a good keeper before he came here and he's just showing that every day, whether it's in the training sessions or in the matches," the Slovak told the club's official website.

"He had a great start when he saved a penalty against Stoke and I think that's really helped him.

"And now he's showing that he is a world-class 'keeper."

Skrtel has also been impressed with the form of another new recruit, fellow defender Mamadou Sakho, who has started in Liverpool's last five games in all competitions.

He added: "In the games he has started he has shown how good he is.

"He has fitted into the team well and he's doing well at the moment.

"I'm happy for him and happy for the team because he is a good player for us.

"I just hope things carry on this way."