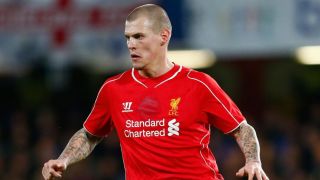 Martin Skrtel is "90 per cent certain" to leave Liverpool this close season, according to his agent Karol Csonto.

Skrtel made just 18 appearances following the arrival of Jurgen Klopp as manager in October with many of those coming when the German opted to rest several first-team regulars during the club's run to the Europa League final.

The Slovakia international is interesting Turkish champions Besiktas, but Csonto admitted a deal was not yet done.

He told Slovakian TV station Markiza: "Besiktas is one of those interested in Martin but we're haven't reached a point where I can confirm Martin is going there, or anywhere else.

"I can say that it is 90 per cent certain Martin will leave Liverpool, but it is far from closed."

Skrtel moved to Anfield from Zenit in 2008.