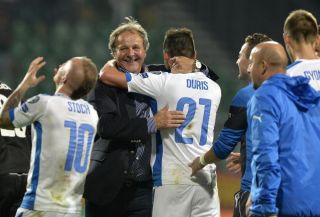 Slovakia led 1-0 at half-time courtesy of Juraj Kucka, who pounced on an Iker Casillas blunder in the 17th minute in Zilina.

Paco Alcacer came off the bench and appeared to have salvaged a point for Spain with eight minutes remaining but Stoch nodded home five minutes later as Slovakia stunned the European champions.

"I am thrilled. We put in a fantastic performance in front of a full stadium. I hope we pleased our fans," Kozak said post-game.

"This win is very precious – Spain have not lost a qualifier in eight years. Our players put in a very brave performance.

"We fought very hard and gave our best, especially at the back.

"All the boys made a fantastic effort and played until the final whistle.

"People will say Spain underestimated us, but that is not true. We made Spain put maximum effort into the game. They gave us some hard times – [Matus] Kozacik in goal showed his class late in the first half and several times in the second.

"We had players suffering from cramp, but they battled through the pain and made the whole country happy."

Slovakia are now three points clear atop Group C, with two wins from two, a position goalscorer Kucka did not expect to be in.

"Our will, heart and fighting spirit decided the game," he said. "They had more possession, for sure, but we fought until the end.

"We tried to fill the gaps, especially in midfield. We played aggressively – we wanted to win. Of course, there was a little bit of luck involved too."

Kucka added: "I didn't expect six points after two qualifying games. We were in a good mood after the first victory in Ukraine. Now we are extremely happy."