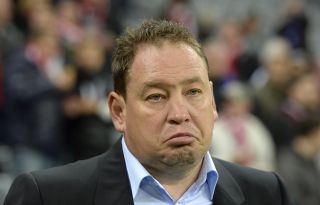 The hosts went in front midway through the first half of their UEFA Champions League clash thanks to a chipped effort from Zoran Tosic, only for a Sergio Aguero double to turn things around for City.

Defeat leaves CSKA three points adrift of City in third place in Group D and facing an uphill challenge to qualify for the round of 16.

Slutsky felt that his side were unfortunate not to have taken something from the game, but stressed his disappointment at his their failure to hold on to the lead.

"We could have got a grip on the game after we made it 1-0, but unfortunately we conceded very quickly," he said.

"It's a pity. I'm so gutted that it is difficult for me to find the words here.

"We started well and Zoran Tosic's goal wasn't scored against the run of play.

"We attacked a lot in the second half and had chances until the very last – that is why I am so bitter and disappointed now."

CSKA will attempt to gain revenge when they travel to the Etihad Stadium to face City on November 5.