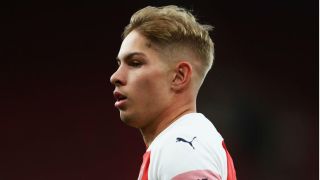 RB Leipzig have completed the loan signing of Arsenal teenager Emile Smith Rowe until the end of the season.

Smith Rowe, 18, has played for the Gunners this season, appearing six times across the EFL Cup and Europa League, netting three goals.

The attacking midfielder has looked particularly promising in his four European outings, scoring on trips to Vorskla and Qarabag.

But, having failed to make an appearance in the Premier League for Unai Emery's men, the England Under-19 international has been allowed to head out to the Bundesliga on loan.

The attacking midfielder is the latest in a growing trend of young British players heading to the Bundesliga, with Reece Oxford, Ademola Lookman, Rabbi Matondo, Jadon Sancho and Smith Rowe's Arsenal colleague Reiss Nelson have all opted to move to Germany to further their development.

We are delighted to announce the loan singing of @emilesmithrowe !

The 18-year-old joins us on loan until the end of the season from @Arsenal and will wear the number 18 shirt.