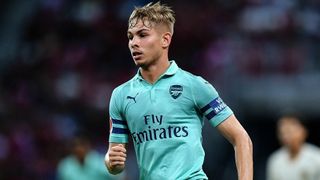 The 18-year-old made an impression on the Gunners' pre-season trip to Singapore, scoring a fine goal in the International Champions Cup clash with Atletico Madrid.

The midfielder, who has been with the club since the age of 10, has now been tied down to a new deal.

"I am pleased with Emile's contribution so far this pre-season," said head coach Unai Emery. "He is working very hard and has lots of potential.

"I look forward to working with him and the other young players and helping them to develop as Arsenal players."

An England youth international who was part of the team that won the FIFA Under-17 World Cup last year, Smith Rowe made his first appearance for Arsenal's senior side in the friendly fixture with Boreham Wood on July 14.

He followed his goal against Atletico with an assist for Alexandre Lacazette in a 5-1 win over Paris Saint-Germain on Saturday.