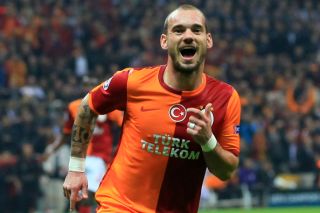 The Netherlands international may miss the crucial UEFA Champions League clash at the Bernabeu on Wednesday.

Mancini said he was unwilling to take any risks with Sneijder, 29, due to his importance to the Turkish Super Lig side.

"He's been working with the team over the last four or five days, and tomorrow we'll make a decision for him.

"But it's important that we can't take any risks with Wesley, because he's very important for us."

Galatasaray sit second to Real in Group B, with Copenhagen and Juventus close behind with two matches remaining.

Mancini played down the importance of the encounter and said his team's fate would likely come down to their matchday six clash at home to Juventus.

"It is mathematics. This doesn't change if we lose or if we take one point tomorrow," he said.

"In my opinion, the last game will be the key game against Juventus - but we have one game tomorrow and even it's difficult in football, you should never say never.

"Anything can happen and we will try to play a good game and try to win if it's possible. We know that it'll be difficult but we want to try."

Despite not wanting to think too far ahead, Mancini has set his sights on claiming a crucial win against the Serie A giants.

"This is where we are at this moment. I think that also because after the first game in Istanbul (a 6-1 loss to Real), for the team it was really difficult to go through to the second stage," he said.

"Now we are alive, we shall play two games, in football it's difficult this game against Juventus, but we can do everything.

"We can beat Juventus and if we beat Juventus we go through. But at this moment in time, we need to think about the Real Madrid game."