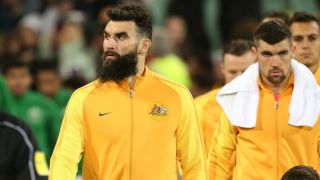 Socceroos head coach Ange Postecoglou named an extended squad ahead of the first leg against Syria in Malaysia on October 5, with Rukavytsya back in the fold as well as captain Mile Jedinak.

The 30-year-old has scored four goals in seven games for top-flight Israeli side Maccabi Haifa and could get the chance to add to his 13 caps – his last appearance coming in a friendly against Canada in 2013.

Skipper Jedinak, who failed to make Aston Villa's squad last week, could play his first match for the Socceroos since June's qualifier against Saudi Arabia if he overcomes a groin injury and proves his fitness, having missed the Confederations Cup.

Dutch-based winger Craig Goodwin also comes into the initial squad, along with James Jeggo before Postecoglou culls his roster to 23 players next week.

"There is a short turnaround from the last matches so we are fully focused on these upcoming fixtures against Syria," Postecoglou said.

"The players that we have selected for these crucial matches all have the benefit of several club matches under their belts over the past few weeks, and I am confident whichever 23 players we settle on will be able to do the job next month.

"Now that the match venues have been confirmed, we will prepare for our fixtures against Syria just like every other international opposition we faced throughout this campaign."

Malaysia will be the location for the opening leg of the play-off, before the Socceroos welcome Syria to Sydney on October 10.

The winner will advance to the inter-confederation play-offs, which pits the AFC against CONCACAF.