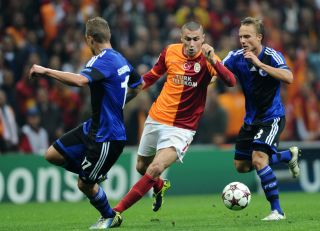 A 3-1 loss at Galatasaray on Wednesday was Copenhagen's second in Group B, with their only point coming in a draw against Juventus.

Despite being bottom of the group, Solbakken believes they are still a chance of progressing if they can upset Galatasaray on November 5.

"If we win at home we are still alive in the group but if we lose we are practically dead," the Norwegian said.

"If you make individual mistakes, you get punished like we were in the first half.

"Credit to Galatasaray. They played really well and they are a fantastic team. However, we should not give in – if we can produce our best in Parken, I am sure we can make it."

Solbakken said his team's slow start, which saw them concede three times in the first half in Turkey, made it tough for them.

"We had a bad start to the first half and they punished our mistakes immediately," Solbakken said.

"We have to admit that we were not at our best on the night while Galatasaray were, and consequently the difference became as big as it did."

Galatasaray, who are second to Real Madrid in the group, were better than his side on Wednesday, according to Solbakken.

"As Galatasaray dropped their pace the game became very end to end, but we have to remember that better teams than Copenhagen have been in trouble here," Copenhagen's head coach said.

"We simply have to admit that we were up against a better side – we just have to hope we will be able to do better in Parken."