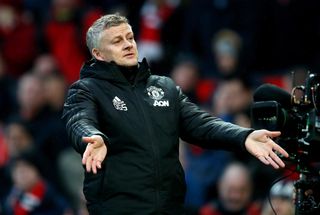 Ole Gunnar Solskjaer is convinced Manchester United will give him the time and backing to turn the stumbling giants around.

Back-to-back defeats to Liverpool and Burnley have been compounded by a toxic atmosphere around the club, with fans making their anger at the Glazer family and executive vice-chairman Ed Woodward loud and clear.

Pressure and scrutiny is also ratcheting up on manager Solskjaer, yet the 1999 treble hero is understood to retain the belief and confidence of the Old Trafford hierarchy.

“It's not been nice losing two games but we go again. You've got to go on to the next one with the right mentality and look forward.”#MUFCpic.twitter.com/kJN3HWjs2G— Manchester United (@ManUtd) January 24, 2020

United head to Tranmere in the FA Cup fourth round on Sunday in desperate need of a victory, but the Norwegian remains confident they are on the right track.

“When you start on something, you stick to that plan,” Solskjaer said.

“For me, anyway. I’m not going to change six or eight or nine or 10 months after I got the job and start believing in a different way of doing things.

“I’m going to stick to what I’ve been trusted to do by the club and hopefully that’ll be good enough, and they can see what we’re doing is right.

“It’s one of these jobs – we know how football is nowadays – but all my conversations with the club have been positive.”

Asked if it is about collectively holding their nerve, Solskjaer said: “Of course, we can’t react to all the noise outside.

“Of course there’s always going to be criticism, you’ve got to take the criticism at this club. You’ve got to be stronger mentally, probably, than anywhere else in the world.

“I feel I am, the club is strong. The staff I’ve got with me, they’re very strong mentally so we’re sticking to what we believe in and I’ve got full faith in what we’re doing.”

Solskjaer on turning things around: "Of course you can see other teams have done well. Jurgen spent four years building his team and they're doing well now, so of course – I've said so many times – it's not gonna be a quick fix" #MUFC— Simon Peach (@SimonPeach) January 24, 2020

Solskjaer has been charged with rebuilding the culture of the squad after the troublesome post-Sir Alex Ferguson period, with the former striker saying you have to lay the foundations before you can put the roof on.

The United boss says “we’ve had a couple of rainy days and we wish that roof was on”, with injuries to key players and a lack of transfer activity playing a big part in those issues.

United are looking to make at least one signing before the transfer window shuts next month, but Solskjaer knows it will take much longer to turn things around.

“Of course you can see other teams have done well. Jurgen (Klopp) spent four years building his team and they’re doing well now, so of course – I’ve said so many times – it’s not going to be a quick fix.

“We’ve had one proper transfer window in the summer because the Januarys are difficult, but we are trying to do something now.”

While transfer work goes on in the background, Solskjaer’s immediate focus is on beating Tranmere after they shocked Watford in Thursday’s FA Cup third-round replay.

Victor Lindelof is available after illness but Axel Tuanzebe remains out, while fellow defender Eric Bailly could make his first appearance of the season following a serious knee injury despite the problematic and patchy Prenton Park pitch.

“Eric has had a couple of games behind closed doors here,” Solskjaer said.

“The pitch is not great but that’s the same for both of us and the players just have to be focused, ready. There’s divots everywhere.

“This generation coming through with astroturf and nice pitches, they get lazier in their heads.

“Eric is probably one of them who is more prepared and ready for a game with that pitch.

“Everyone’s just got to be focused both for injuries but also of course the bounce of the ball.”