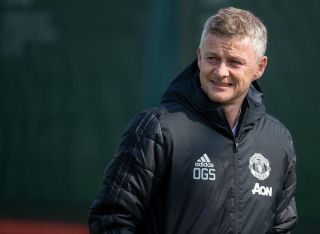 Ole Gunnar Solskjaer believes the 1999 Champions League final proved anything is possible in football but the Manchester United manager attempted to tone down its significance ahead of Tuesday night.

Solskjaer claimed a special place in the hearts of United supporters 20 years ago when his last-gasp strike against Bayern Munich at the Nou Camp sealed an unforgettable treble.

The Norwegian returned to the ground on Monday as his side bid to overturn a 1-0 deficit in the return leg of their Champions League quarter-final against Barcelona.

Yet Solskjaer refused to dwell too much on the past and is fully focused on the task at hand, urging his side to believe they can prevail against the Spanish champions on Tuesday night.

He said: “Of course it’s a fantastic memory for me. It’s the only time I’ve been on the pitch, but I don’t really look back on that night too often.

“My job now is to make us play better than in the first game.

“I was a player back then. In football anything can happen at any time and we know that we can still be in this tie.

“It’s about the quality though. We need to defend well but going forward we need to score. If we keep a clean sheet, we can still be in the tie in the 93rd minute.”

Solskjaer thinks his players should be emboldened by their fightback against Paris St Germain in the last 16.

Following a 2-0 loss at Old Trafford, United responded in spectacular fashion with a 3-1 victory at the Parc des Princes to progress on away goals last month.

Solskjaer recognises the abilities of a Barcelona side who have won four European Cups since 2006 but remains in a bullish mood.

He said: “That memory from PSG will help the players, will help us as a team. We know we can turn things round.

“Of course Barcelona here at the Nou Camp is a difficult prospect but the memory from that night will live with the players.

“It’s not that long ago and we’re one goal better off.”

Alexis Sanchez was among United’s 22-man travelling contingent and is in contention to make a return against his former club after six weeks on the sidelines because of a knee injury.

The Chile international, who scored 47 times in 141 appearances during three seasons with Barca between 2011 and 2014, has endured a largely miserable time at United as a haul of five goals in 41 games would suggest.

Solskjaer said: “For Alexis, it’s a big night and when he’s on the pitch I’m sure he wants to prove a point.

“He wants to prove a point for us as well. He’s been injured, he’s not had a fantastic season so far and let’s hope he can end the season great for us.

“We are in the business end of the season. We’re playing games that Man United are used to playing.

“Let’s hope Alexis can be happy with his performance when he is on the pitch.”

Solskjaer reaffirmed his belief that Paul Pogba would remain at United beyond the end of the season after the Spanish media questioned speculation linking the Frenchman with a summer move to Real Madrid.

“He has been fantastic since I’ve come here and I’ve no doubt that he will perform for Man United as he has done lately.

“I don’t think they (the fans) should worry too much.”