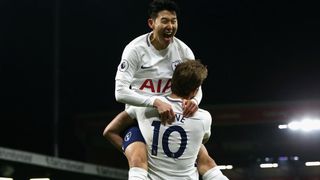 While Harry Kane has dominated headlines with his record-breaking efforts in the Premier League, having scored 39 in 2017 and 56 in total for the year, Son has impressed for Spurs.

Korean forward Son has scored nine goals in all competitions this season, and five in his past seven appearances.

And Pochettino heaped praise on Son as he talked up the 25-year-old's potential to be a hero in his homeland, even surpassing former Manchester United and Real Madrid winger Beckham – who is a worldwide phenomenon – especially in Asia.

"Yes, that is what we think. But we cannot prove this," Pochettino said when asked if Son could rival Beckham.

"When you talk about Beckham, he's a massive world icon. Maybe it's like this with Sonny. But here he's so humble, and he's such a normal guy. That makes him so important to us.

"It's true that the headlines are always for Harry or others, but it's important to recognise him, because he's a very great guy, a very good professional and he's always there, scoring and playing well."

Pochettino added: "Personally, us the coaching staff, we've given him the credit he deserves.

"When you are next to Harry Kane, achieving all he is and scoring so many goals, it's normal that the focus is on Harry Kane.

"But for us it's very important to show Sonny how much he's appreciated.

"And all the players, all the team, they all love him. It's not only because of his performances, but because of how he is as a man."

Tottenham – fifth in the Premier League and 22 points behind leaders Manchester City – are away to bottom side Swansea City on Tuesday.