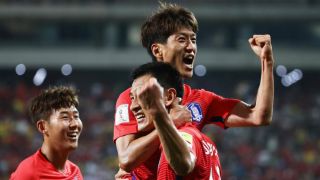 South Korea made a winning start to the final group phase of AFC World Cup qualifying with a narrow 3-2 victory over China in Seoul.

Lee Chong-yong, Koo Ja-cheol and a Zheng Zhi own goal ensured all three points in the opening game of Group A for Uli Stielike's side, although China gave the hosts a late scare.

Yu Hai began their revival with 17 minutes to play and when Hao Junmin curled a free-kick home three minutes later a comeback looked on te cards.

However, Jung Sung-ryong ensured there was no share of the spoils as he made a fine save to deny Ren Hang late on.

South Korea dominated a scrappy opening, but they were unable to find a way through a resolute China defence, Son Heung-min wasting the clearest opening after 18 minutes.

His miss was quickly forgotten, though, as he delivered the first goal just a few moments later. Son's free-kick was headed down by Ji Dong-won and deflected home by the unfortunate Zheng.

The hosts should have added to their advantage midway through the half as Ji headed wide another Son set-piece, but China finished the opening 45 minutes strongly – Wu Lei wasting two glorious openings.

Wu brought a good save out of Jung Sung-ryong soon after the restart, but China's profligacy was punished by two South Korea goals in four minutes after the hour.

Two left wing crosses brought both goals as Lee and then Koo pounced at the back post after good work from Ji and Son.

However, China had not given up hope and when Yu pulled one back after 73 minutes belief began to spread.

Yu lashed home a superb strike after Oh Jae-seok's poor defensive clearance and on their next attack China futher reduced the arrears, Hao curling an inch-perfect free-kick beyond Jung.

They could have even snatched a point when Ren volleyed towards goal, but Jung got two hands to it to ensure South Korea clung on to all three points.