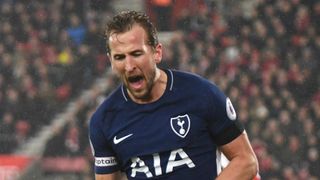 Harry Kane moved to 99 Premier League goals with a headed equaliser to earn Tottenham a 1-1 draw in a scrappy match at Southampton on Sunday.

Southampton remain in the relegation zone after their winless run was extended to 11 Premier League matches, the current longest sequence without a victory in the top-flight, while Spurs missed the chance to move into the Champions League places.

Kane hit a hat-trick in the reverse fixture but he could not reach his three-figure landmark as Spurs, in the absence of ill creative midfielder Christian Eriksen, toiled at a sodden St. Mary's.

Southampton - who dropped into the bottom three on Saturday due to Stoke City's defeat of Huddersfield Town - took the lead after making a bright start, the unfortunate Davinson Sanchez directing a low Ryan Bertrand cross into his own goal.

Kane levelled 197 seconds later, heading in a Ben Davies corner, and the Premier League's top goalscorer should have won it in the final minute but dragged a left-footed chance wide.

After failing to win at his old club, Mauricio Pochettino's men lost ground in the race for top-four spots, sitting two points behind fourth-placed Liverpool, who visit rock-bottom Swansea City on Monday.

Hugo Lloris also missed out through illness and his deputy Michel Vorm was tested in the first minute, the Dutch goalkeeper collecting Manolo Gabbiadini's effort at the second attempt.

James Ward-Prowse had scored Southampton's last three goals in all competitions but it was a Spurs defender who handed them the lead in the 15th minute.

Dusan Tadic sent Bertrand clear and the England left-back pulled back a low cross that a full-stretch Sanchez could only toe past a helpless Vorm, via the post, with Gabbiadini lurking.

Eric Dier struck the outside of the woodwork as Spurs responded well, before Kane converted his 21st Premier League goal of the season to erase Southampton's short-lived lead.

197 - There were just 197 seconds between Southampton’s opener and Harry Kane’s equaliser for Tottenham. Response.January 21, 2018

The prolific forward, captaining Spurs with Lloris unavailable, shook off marker Jack Stephens, then got above Gabbiadini to nod Davies' corner home.

Moussa Sissoko diverted a Davies drive just wide before Stephens planted a free header narrowly over the angle from a tremendous Ward-Prowse free-kick after 37 minutes.

Ward-Prowse tested Vorm with a 20-yard drive shortly after the restart, but both teams were struggling for cohesion in driving rain on the south coast.

Dele Alli had been involved in eight goals in four previous Premier League games against Southampton, but he dragged a shot wide after 64 minutes.

Southampton's Mauricio Pellegrino brought on Michael Obafemi for his Premier League debut with eight minutes to play and the 17-year-old should have converted Tadic's centre.

But the best late chances fell to Spurs, who recorded only two shots on target in the match, with a brilliant block from Stephens denying substitute Erik Lamela the winner, while Kane missed the chance to score his 100th goal by firing wide in the last minute.