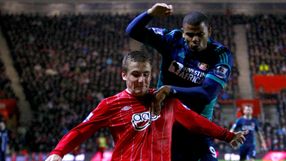 The 17-year-old had been linked with fellow Premier League clubs Arsenal, Chelsea and Manchester City in recent weeks, and fans of the south coast club were braced for another nurtured starlet to go the way of Gareth Bale, Theo Walcott and Alex Oxlade-Chamberlain into the arms of a big-money club.

But Southampton announced the English attacking full-back would be staying with the Saints.

"I think Southampton is the place to be for young kids like me. I'm playing in the Premier League for the first team and that is all anyone wants to be doing, so I just want to carry on," Shaw told the club's website.

"I have been at Southampton since a very young age so I've been here a long time now. I think they are happy with me here, and this club is great for young players like us."

Southampton are hovering precariously above the relegation zone, above 18th-placed Wigan on goal difference.

Saints travel to 16th-placed Aston Villa on Saturday with only a point separating those two sides.

"This will probably be our biggest game of the season," Shaw said of the trip to Villa Park. "We know that we can beat them so, if we go there and play our game, I'm sure we can get three points."