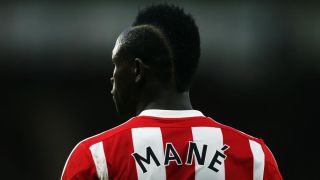 Southampton will be powerless in trying to hold on to Sadio Mane if the player wants to leave the club, according to Crystal Palace manager Alan Pardew.

Mane was a £12million signing from Red Bull Salzburg at the start of the 2014-15 season, joining Southampton on a four-year deal.

His performances have seen him attract the attention of bigger clubs, and speculation is rife about a possible transfer.

Pardew, who is set to come up against Mane's Southampton in the FA Cup on Saturday, said the club will struggle to hold on to anyone that has their heart set on leaving.

"I think he’s been impressive and there have been a lot of rumours so maybe there is a connection there," he said.

"I’m sure Southampton are in a strong financial position to resist a bid so it’s whether the player really has his heart at Southampton.

"I know from experience at Newcastle [United], if the heart and mind is not there, finance becomes irrelevant."

Pardew looked towards the FA Cup clash, and said the game for Palace is just as important as what Chelsea's Champions League tie against Paris Saint-Germain will be.

"It is a competition I love," he said. "To be part of that folklore of winning is something that has just missed me on two occasions - on the third occasion I hope it doesn’t.

"The crowd and atmosphere around our club is very similar to 1990.

"This is a crucial game for our season - as important perhaps as Chelsea against Paris Saint-Germain in the Champions League."