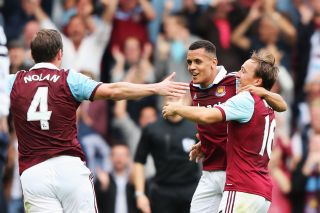 The former Manchester United man, who was loaned out to Championship outfit Birmingham City last season, has delivered a string of impressive performances in recent weeks.

A stunning individual goal in West Ham’s shock 3-0 win at Tottenham on Sunday represented Morrison’s fourth strike of the campaign.

The 20-year-old now faces the challenge of maintaining his fine form when England Under-21s take on San Marino and Lithuania in European Championship qualifiers.

Southgate told the Football Association's official website: "I was always very aware of Ravel coming through the England junior teams and I've spoken to (West Ham boss) Sam Allardyce at length about his progress.

"It's just great to see a young lad enjoying himself and I loved his comments this week when he said that he'd been reading lots of good things about himself and that must be great for him.

"Young people make such massive leaps and progression at this age and he's clearly doing that at the moment."

Morrison was sold by Manchester United in January 2012, with concerns over his discipline an apparent factor in the decision of Alex Ferguson.

Southgate added: "There are lots of good people at West Ham that have got him in a good place and I think it's now for us to create an environment for him here where he can express himself and feel comfortable and able to trust the people that are around him."

Morrison last represented his country almost three years ago, when he represented the Under-18 side in a 3-0 win against Poland.