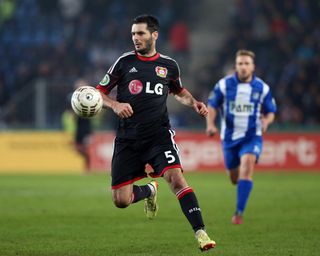 The Bosnia-Herzegovina defender arrived at the BayArena in 2013 and made 27 appearances in the league last season as Leverkusen finished fourth.

Spahic has featured in nine of Leverkusen's 10 Bundesliga games in 2014-15 and his form alongside Omer Toprak in central defence has earned him a new deal with the club.

The 34-year-old, who was signed from Anzhi, is delighted to have agreed an extension and hopes to help develop the club's younger players in the coming years.

"I'm part of a great team here in Leverkusen," he said. "We've got an ambitious side that can still develop, and I believe there is plenty we can still achieve together.

"I feel very settled in Leverkusen and would like to use my experience to help our young team."

"Emir has been, and continues to be, an absolute pillar of our team," he said. "He gives our side stability and security.

"His technical ability, strength in the tackle and composure make him extremely valuable to us.

"We're delighted to have extended terms with such an important character."