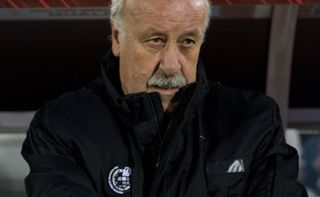 Xavi Hernandez and Alvaro Negredo scored the goals for Spain, who had to wait until after the hour mark to break open Belarus' defence for the first time on Friday, while the visitors pulled a late goal back on the island of Mallorca to ensure a nervous finish for Del Bosque's team.

While Del Bosque was happy the World Cup and European champions had taken another significant step towards World Cup qualification at the Iberostar Estadi, he admitted his side have not been playing top football for the best part of a year.

"It is true that the match seemed a repetition as recent others we have had," Del Bosque said after the game.

"The games with Finland (in September), Georgia (last year) and Belarus have been kind of a copy.

"We can't deny we struggled and we couldn't score until the 15th minute in the second half (but) we can be satisfied. We carried on with our spirit (after taking the lead).

"The goal they scored complicated the match and it sowed concern in us because we weren't comfortable.

"But the most important thing is we have taken a step forward in our aim that is trying to qualify for the World Cup."

Casillas' future with both the national team and his club, Real Madrid, has been under scrutiny since Jose Mourinho began preferring Diego Lopez at the Spanish capital club last season.

But Del Bosque denied his decision on Friday had anything to do with a lack of faith in Casillas.

"I have already said we are going to try to act following the logic and common sense," Del Bosque said.

"Casillas got injured against Galatasaray (in September) and he just has played one game in these last five weeks, so we believed it was convenient that Victor took the place.

"This is not significant, we don't say that in the future he is going to play or not but we keep the (incentive) for the others."