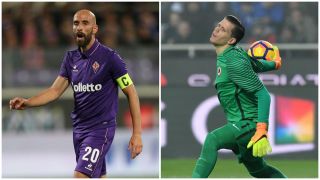 Inter are keen on Spanish midfielder Borja, though Fiorentina are believed to be holding out for a €10million transfer fee.

Arsenal goalkeeper Szczesny, who played under Spalletti while on loan at Roma, has also been linked with a switch to San Siro.

While the Inter coach expressed his admiration for both individuals, he insisted the club's focus needs to be on selling first.

"Borja is a player we had already tracked at Roma and who Inter were observing before my arrival," Spalletti told Sky Sport Italia.

"I know that he will change club this summer, but for the moment we are sorted in that area. In any case, he is certainly a player you can rely on."

On Szczesny, he said: "We already have Samir Handanovic, who is very experienced and strong. I've already worked with him and I know his quality. For the moment we've got him.

"Then obviously Szczesny is a modern player, because he can use his feet and in modern football you need that to start moves from the back.

"We want to do something important this season and we have strong players in the squad, so first of all we'll take into consideration those we've got and who I like.

"Then, looking at Financial Fair Play, we'll try to improve the squad, focusing on sales first. It might seem as if Juventus, Roma and Napoli are impossible to catch, as it won't be easy to get an extra nine or 10 victories per year.

"Our objective is to give Inter back the history it deserves."

Ever Banega has been linked with a move to Sevilla, which would free up a spot in midfield for Valero.