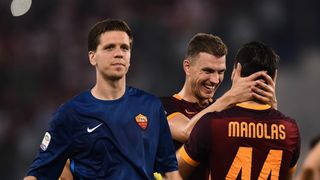 Luciano Spalletti is confident Edin Dzeko can resurrect his Roma career despite a poor first season in Italy.

Dzeko arrived with plenty of hype after signing for the Serie A giants from Manchester City, but he managed just 10 goals in 39 appearances across all competitions last term.

But Spalletti insists that Dzeko is doing all the right things and showing the right attitude in training to improve on that in the new campaign.

"I can only evaluate his desire to stay at Roma," Spalletti told reporters. "Last year I tried to help him a lot, now I'm watching what he's doing. He needs to have the desire to be part of Roma.

"If he keeps up this attitude he’ll be Roma’s centre-forward."

Meanwhile, Spalletti says the club is continuing to to work on a deal to re-sign goalkeeper Wojciech Szczesny following his return to Arsenal after the expiry of his loan.

"Both the goalkeepers [Alisson and Bogdan Lobont] are strong, but we still don't have Szczesny," he said.

"We have two strong goalkeepers, so we'll see their reaction but that’s always an advantage. We're working for Szczesny, for now we have Lobont."