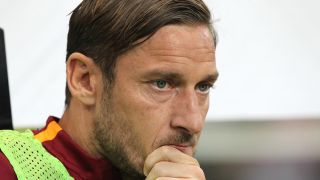 Luciano Spalletti is not sure whether Roma great Francesco Totti will farewell the Serie A club ahead of this weekend's season finale.

Roma's final match of the season against Genoa on Sunday is a sell out in the Italian capital, with Totti expected to feature for the last time.

A capacity crowd of 68,530 at the Stadio Olimpico could witness Totti's final appearance after 25 years with the first time but Roma head coach Spalletti in unsure about the 40-year-old's future plans.

"There's no other thought than Roma-Genoa now, and I don't know if it really will be Totti's farewell," he told Gazzetta dello Sport.

"He must say what he plans to do and I don't know what he's thinking.

"Certainly, during the game, he'll have the opportunity to help his team-mates win for a Champions League [group-stage] spot."

Totti has made 17 Serie A appearance this season, scoring twice as Roma sit second in the table - a point adrift of Napoli in the race for the Champions League automatic qualification spot.