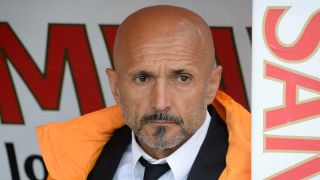 Roma coach Luciano Spalletti insists his focus is on Sunday's final game of the Serie A season against Genoa regardless of links to the vacant Inter job.

Inter sacked Stefano Pioli this month, with Stefano Vecchi now in caretaker charge, and former president Massimo Moratti described Spalletti - whose Roma contract expires in June - as someone with an "ideal profile".

However, the Roma coach has brushed off talk of his future, urging everyone at the club to "work in the same direction" as they look to secure second spot in the table and automatic Champions League qualification.

"We need to go all the way and finish everything we have been working towards for a year," he told a pre-match news conference.

"We must all be concentrated on this victory, as these three points are fundamental, otherwise it is Napoli who will be celebrating. They are in great shape and will probably beat Sampdoria - they certainly will not give up to the last minute.

"I said if I do not win then I will leave, because, at that moment, the team needed me to take on responsibility.

"People always try to introduce some poison until we start biting each other. We have to all work in the same direction, which is to make Roma great."

And while Spalletti is cautious to celebrate a top-two spot - and Francesco Totti's final game for the club - before securing victory, he believes his team have proven themselves to be worthy Roma players.

"The biggest danger is that our heads will drift to a different issue, one just as sparkling and important, but lose sight of the primary objective," he added.

"What kind of a party would it be without the three points? So we need to play in the right way and exhibit our strength, our mentality, that fuel that took us to this position. In every game, you start from scratch. When we get accustomed to winning, it becomes more of a 'we' than a 'me, me always me'.

"If, every time you win a match, the squad feels that they have to start from scratch and build it all up again, prove themselves all over again, that is the fundamental mentality for a winning team.

"This squad might have disappointed at times, but it never betrayed. We can trust these players. This is a squad worthy of Roma."