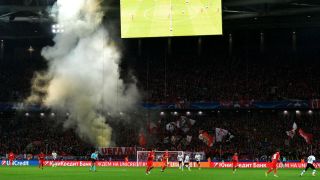 Spartak Moscow have again been charged by UEFA after fans criticised the governing body with a banner during their Champions League clash with Liverpool.

The home supporters at Otkrytiye Arena unveiled a banner that read "UEFA Mafia" and also let off smoke bombs at the 1-1 draw against their English opposition.

UEFA have subsequently charged the Russian champions for the banner as well as what UEFA described as "illicit chants", setting off fireworks and blocking of stairways.

The charges come after Spartak were charged for fans firing a flare in the direction of the referee in the Champions League meeting with Maribor.