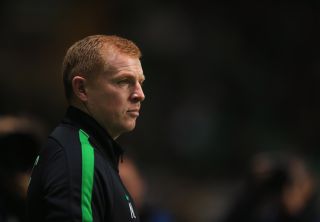 Georgios Samaras headed home Emilio Izaguirre's 34th-minute corner to give the visitors the advantage, but ultimately they were made to work hard for the points.

Partick striker Kris Doolan equalised from close range midway through the second half, having rattled the crossbar a few seconds earlier.

However, the scores were level for just eight minutes before Partick gave away possession near the halfway line and substitute Amido Balde raced clear to net the winner.

Neil Lennon's side are now six points clear of Aberdeen in second with a game in hand.

St Johnstone moved up to sixth with an impressive 2-0 triumph over fourth-placed Motherwell.

The hosts had nothing to show for a dominant first-half display but Stevie May finally broke the deadlock three minutes after the restart when he converted the rebound after Gunnar Nielsen had saved from Gary McDonald.

Nielsen was culpable when St Johnstone extended their lead in the 64th minute, slipping when retrieving a backpass from Simon Ramsden to leave Nigel Hasselbaink with a simple finish.