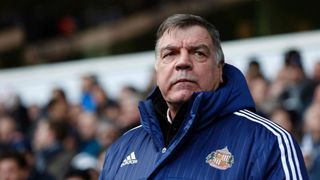 Sunderland manager Sam Allardyce was frustrated by the nature of Tottenham's equaliser at White Hart Lane as the hosts ran out 4-1 winners in the Premier League on Saturday.

Despite being pegged back for much of the first half, Allardyce's men led courtesy of Patrick van Aanholt five minutes before the break only to concede 91 seconds later to Christian Eriksen as Spurs went in level at half-time.

Mousa Dembele then put Spurs in front before Eriksen and a late Harry Kane penalty completed what proved a comfortable win in the end.

Debutant Jan Kirchhoff deflected in Eriksen's second before fouling Danny Rose for the spot-kick, but Allardyce refused to single out the recent arrival from Bayern Munich for criticism.

"I don't need to offer an explanation [for Kirchhoff's second-half introduction]. I wanted to make sure that our lads had the legs, because the energy was running out," he told BT Sport.

"We faced the trials and tribulations of three games in a week and the likes of John O'Shea and Wes Brown, in their late 30s, they're going to feel the pace.

"The extra man was to tighten things up but that wasn't the problem. We opened up too much, allowed them the opportunity to get into the game rather than staying tight and compact up to the second goal.

"That was something we were hopefully going to continue. But letting them score so soon after us, when we had done things right defensively and scored a superb goal - we shot ourselves in the foot.

"If we'd gone in at 1-0 it would have lifted us but we got more and more tired.

"The energy was diminishing and we got beaten by a good team. the goals we gave them were too easy, we should have kept it tight and tried to play our way back in and not chase it."

While Kirchhoff had a debut to forget, Jordan Pickford enjoyed an impressive Premier League bow - making a string of smart saves before Spurs cut loose after the break.

On Kirchhoff, Allardyce added: "He's come into the Premier League and he's found out how difficult it is. It's always a risk but you can't judge a man [on one performance]

"Time will tell, he has to learn from it quickly. He's contributed to the loss but the team opened up too much and that was the problem.

"[Pickford is] a good lad and the experience he's gained on loan has helped him a tremendous amount, he came in and looked very comfortable for his age.

"It's a bright future for him and us."